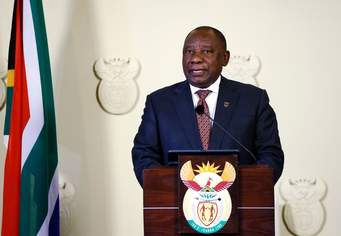 Those hoping for a further easing up of restrictions were left disappointed following president Cyril Ramaphosa’s address to the nation on Sunday July 12.

Ramaphosa has found himself having to perform a delicate balancing act, with a failing economy in one hand and the health and safety of SA citizens in the other.

“In light of the increased rate of infections, the National Coronavirus Command Council (NCCC) and Cabinet have considered returning parts or all of the country to a higher alert level,” he said.

However, they eventually decided to remain at Level 3 for now.


The State of Disaster was also officially extended to August 15.

As of Monday July 13, some key changes to lockdown regulations have come into placee.

First, the wearing of cloth masks by members of the public is mandatory.

“Employers, shop owners and managers, public transport operators, and managers of any other public building are now legally obliged to ensure that anyone entering their premises or vehicle must be wearing a mask,” said Ramaphosa.

All workplaces will also need to ensure that there is designated coronavirus official to make sure they adhere to the necessary health and safety protocols.

The passanger limit on taxis doing local trips has been lifted, but taxis travelling long distance must continue filling to only 70% capacity.

The curfew has also been brought back, this time running from 9pm to 4am.


Possibly the most contentious regulation that was introduced was the re-banning of the sale of alcohol.

“There is now clear evidence that the resumption of alcohol sales has resulted in substantial pressure being put on hospitals, including trauma and ICU units, due to motor vehicle accidents, violence and trauma,” Ramaphosa said.

This has already received much pushback, not just from members of the public but from the alcohol industry as well.

Complaints have been raised about the lack of warning of the ban, as well as the possible impact on the economy such a ban could cause.

Such actions, Ramaphosa said, are necessary in order to combat the spread of Covid-19.

“While the surge in infections has been expected, the force and the speed with which it has progressed has, quite understandably, caused great concern,” Ramaphosa admitted.

As of Tuesday July 14, the Eastern Cape was the third-worst hit province, with just over 50,000 cases reported. The Western Cape was second, with over 80,000 cases, while Gauteng was leading with over 100,000.

However, Ramaphosa also noticed that while cases were on the increase, deaths due to Covid-19 had been relatively low.

The national fatality rate is currently sitting at about 1.5%, while the international rate is approximately 4.4%.

“We owe the relatively low number of deaths in our country to the experience and dedication of our health professionals and the urgent measures we have taken to build the capacity of our health system,” he said.